Smell enters directly into the limbic system. It triggers emotion. You identify first through your nose before you identify through vision. Babies smell their mothers before seeing them. Smells surround us all the time; they permeate the immediate environment and penetrate the whole body. We breathe 23,040 times a day and inhale 12.5 cubic meters of air. With every breath, molecules flood through our body. Even when we sleep, we smell.  What I try to do is prove that we are breathing in all this information by we have no tools to make use of it…

I see smell as information, or a tool of navigation and communication. How can you maximize the process of living by integrating these facts? Our society and culture have traditionally been dominated by the visual. Increasingly, however, there are signs of rejection—we are so sick of seeing and the predominance of vision. What happens when you let your eyes relax and perceive the same reality through your nose? What happens to your system and your relation to the system or situation you live in? Does something change? And if something changes, what are the consequences? —Sissel Tolaas, “Life is Everywhere”

Imagine a magazine that literally smells like fear.  Mono.Kultur, a Berlin-based art publication, dedicated its Spring 2010 issue to Norwegian-born artist Sissel Tolaas who has spent a lifetime creating an archive of close to 7000 scents.  “I collected smells instead of writing a diary,” she says, and uses those smells in her conceptually-based art.   The magazine itself is a work of olfactory art. Instead of the usual photographs of visual art, the magazine is scattered with 12 scents impregnated into the paper by the a technique called microencapsulation that is most commonly used in the making of scratch and sniff stickers and the perfumed inserts of fashion magazines. The scents embedded in the magazine are Tolaas’s recreations of the odor of sweat from the bodies of men who suffered severe phobia attacks.  Tolaas asked the men to wear an apparatus that could capture their sweat during these moments of fear and panic. Through a combination of chemistry and artistic creativity, Tolaas was able to synthetically replicate the sweat’s molecular structure.

Tolaas’s talents as a conceptual artist, olfactory scientist and sly provocateuse have put her in museum exhibitions in the United States and Europe, landed her jobs at universities and contracts with fragrance and flavor companies, and earned her commissions to study smell and its possibilities in the healing art of medicine.  Despite her reputation as an olfactory artist, Tolaas has never created a commercial perfume.  Why bother, when every body on Earth is a container for its own special perfume?

The interview in Mono.kultur was conducted by Tina diCarlo, and the issue can be purchased directly from the magazine’s website for 5 Euros. 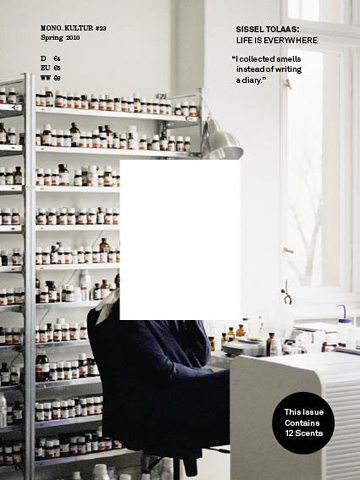 Here is a video interview of Sissel Tolaas during her 2012 exhibition at Rotterdam’s V2_Institute for the Unstable Media, during which she served bowls of white rice to museum visitors as they walked up to walls and smelled odors Tolaas created and curated.  For more, read this article from the New York Times.

One Response to "Sissel Tolaas Knows the Smell of Fear"